Want to Learn how to prepare and make a Tagine as well as Mezze, Cous Cous & much more for $135? 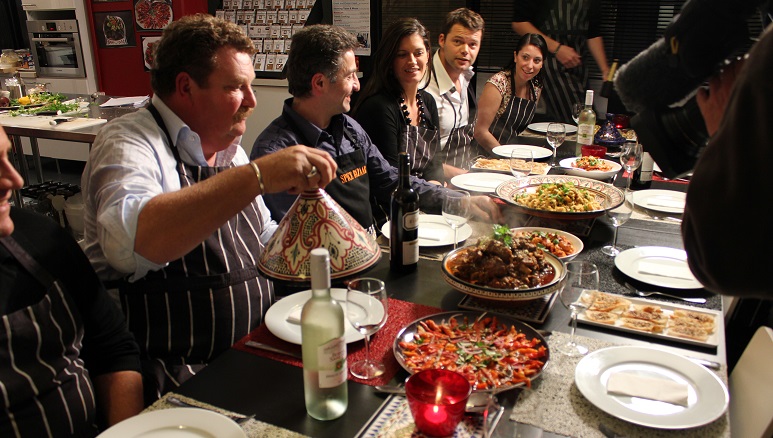 WHAT IS A TAGINE?
Tagine is the Moroccan word that refers to both the conical shaped slow cooking pot, and also to the food prepared in it. The shape preserves the moisture in food while cooking, and also creates a circulation within the dish, infusing the food with spices and flavours. Typically Moroccans' love sweet and savoury flavors in the same dish, such as
Mrouziya (Honeyed Lamb) or feature meat or poultry gently simmered with vegetables, olives, preserved lemons, garlic and wonderful spice blends like Ras El Hanout, Baharat or Moroccan La Kama. We think that cooking in a Moroccan tagine somehow gives our dishes an indescribable ''extra' flavour.

SERVING TAGINES
Serving tagines can't be used with heat, but can be used to present a stunning meal at a dinner party. Pile up your prepared couscous on the base, then top with your cooked tagine/curry, drizzling the sauce over so that it soaks into the couscous. What a fabulous way to present a delicious meal.

How to Prepare and use Terracotta Tagines 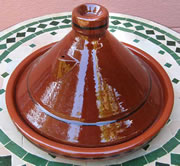 BEFORE FIRST USING YOUR COOKING TAGINE(Once only)

Soak in water for 24 hrs. Coat inside with olive oil & put into a cold oven. Set temperature @ 100C and leave in for 1.5 hours. The tagine is now ready for use

EACH TIME YOU COOK
Soak your cooking tagine in water for 24 hours before you use it.
Warm the base up slowly over a low flame, and don't subject your tagine to intense temperature changes (don't place a hot tagine on a cold surface) . Once hot enough, fry onions, Spice Bazaar spices and meat briefly, add vegetables (timing varies according to recipe being used), then add your liquid. Put on the lid and leave it to simmer for as long as required. Check occasionally, stirring and adding more liquid if necessary. Traditionally tagines are long, slow cooked, full flavoured dishes which melt in the mouth when served, so don't rush the process. Serve your tagine direct to the table with Fruit & Nut Cous Cous and Mint Tea.

CARE OF YOUR TAGINE.
Cooking tagines can be used on a low stovetop flame, in an oven, over coals, in a Weber BBQ, or on an electric stovetop with a heat diffuser.
Always hand wash your tagine after use, never put it in the dishwasher.
Don't change the temperature dramatically : warm it up slowly, and don't place a hot tagine on a cold surface.
Don't rush the cooking process, long and slow is they key. Don't be tempted to turn up the heat to hurry things along.

Get the latest updates on new products and upcoming sales